This is a beautiful song of all seasons about a happy feeling of having a hangover from over parting and wanting more the next day.It took Mdladla a  long time this one right. Initially the first version was created by his late producer Thokozane Mahlangu as a native new age kwaito jam  in 2009, and they did a video for it  with bomb production and his brother Sthembiso, a member of his old group Ndrebele civilizations was part of it.

All the efforts that were made to release this song on its original form where invalid as the files of the original composition couldn't be found as the result of the passing of Thokozane his producer and everything had been lost and hope all gone yet He remained hopeful and looked for another means to bring the song to life in honor of his late friend and producer Thokozane. He understood from that point that it was going to be a solo effort and he would have to work alone on it.

A new process had to take place and procedures where implicated so to revive and recover the song . " I swear , I failed a million times until I  finally met Guru Crew  from " GURU CREW ENTERTAINMENT" .A kwaito group, whose member Zakhele Radebe known as "Mazakaza"  managed to help with this ordeal and find a way to aid the song and add a sub-genre of house "Amapiano" and carefully infused  it with a kwaito touch thus giving birth to STLAMA SAMA PIANO" _ Mdladla .
MDLADLA MO N MO has been a harder worker all his life and believes that nothing will come to you as you m ust go out and try your outmost best to get it ; It took him over a decade with no rest to get things right and get it going  but finally it paid of . He had promised just before Easter that he will drop and he has successfully do so. You can get the track on various digital platforms . A music video is on the  way soon thanks to Many Pour Late and Cardo De Dj for work, they did on it.

you can also stream the song here :  Stlama sama Piano

Artwork : Mdladla MO "Stlama sama Piano" This is a beautiful song of all seasons about a happy feeling of having a hangover from o... 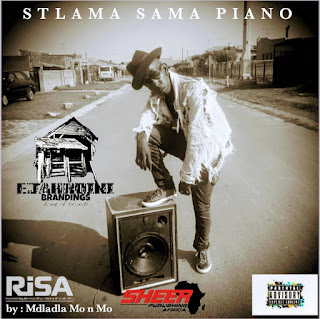